“The Disability Under Siege project, aims to provide the intellectual, financial and logistical resources required to deliver a transformational step change in education provision for children with disabilities in conflict-affected states”

Disability Under Siege is a co-created programme bringing together a community of researchers, educational practitioners, advocacy organisations and disability led groups in the UK and Middle East.  It will contribute to research efforts by providing intellectual and logistical resources that local practitioners need to transform education provision for children with disabilities in conflict-affected countries.

There is an established link between conflict, and poor development outcomes. For many Low and Middle Income Countries (LMICs) the presence, and legacy, of violence within their own borders or in neighbouring states hinders existing efforts to enhance development, while also placing additional burdens upon the state.

The consequences of conflict and crisis echo throughout society, but the challenge it poses for education provision for those with disabilities is particularly acute. Instability erodes existing capacity, whilst simultaneously increasing demand, as the proportion of the population with a disability, either as a result of physical or psychological trauma, rises. Research commissioned by UNICEF indicates that over 85% of children with disabilities have never attended school, yet despite this, the link between conflict, disability and access to education is under-examined.

While the activities of the Network Plus project will initially be focused on the Middle East, the intended outcomes will be scalable to other comparable contexts across the works and with the ultimate aim of contributing to the UN Sustainable goals (UN SDGs) 4, 10 and 17.

For further details of this event and to register your attendance please visit the Eventbrite website. 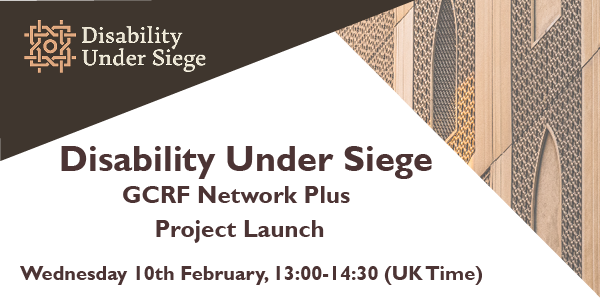 Watch Nour’s story about the obstacles she faces growing up in Lebanon and how “inclusive design” can help to overcome them.

The Disability Under Siege Network+ Project is funded by

This website uses cookies to improve your experience while you navigate through the website. Out of these, the cookies that are categorized as necessary are stored on your browser as they are essential for the working of basic functionalities of the website. We also use third-party cookies that help us analyze and understand how you use this website. These cookies will be stored in your browser only with your consent. You also have the option to opt-out of these cookies. But opting out of some of these cookies may affect your browsing experience.
Necessary Always Enabled

Any cookies that may not be particularly necessary for the website to function and is used specifically to collect user personal data via analytics, ads, other embedded contents are termed as non-necessary cookies. It is mandatory to procure user consent prior to running these cookies on your website.